Previous Next
Be Stupid!
With the growing number of activities developed by Torreluna and the simultaneous increase in team members, we also increased the number of our team agreement meetings. A few months ago, during one of those meetings Evangelina raised the issue of the need to develop a shared vision.

I gave a start: for many years now, I’ve been meeting managers and other professionals complaining about the lack of a clear and shared vision. And, for many years, my first thought was that having a vision isn’t that important in actual practice or, to say it better, that people are more likely to complain about the lack of a vision rather than taking on their own responsibilities.
My gut reply to Evangelina’s proposal would have been something like: “Vision? What vision? We all know well what we want and like to do. Let’s move on!”.
Actually, I just decided to take some time. Yet, Evangelina kept on insisting on her proposal and some others seemed to agree with her. I yielded and we started working. The result was simple and yet extremely stimulating. Since then, we being every meeting reading the outcome of that work, that is actually more a mission than a vision statement. Since then, we also compare every important decision with such statement, wondering whether we are proceeding in that direction.
Here’s our mission.

offering projects aimed at the development of human potential

that make sense for

The deranged exploration of oneself

What did I learn from this episode? Many things, but the main one concerns elaboration. There’ll always be paths and decisions we reckon smarter, better than others. However, if we just stick to those, aren’t we excessively limiting our choices? I believe that each of us can: 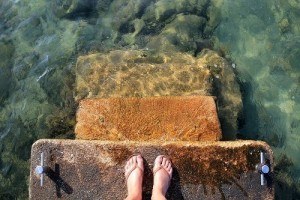 Thinking of stupidity, while I am writing the 2010 Diesel campaign Be Stupid! and the book on leadership written by Anna Zanardi for the release of that campaign come to my mind. Stupidity as a courageous, daring, breakthrough action. Stupidity leads to running risks and helps not to be stopped by our concerns. Be foolish, used to say Stove Jobs in this video, that has now become famous worldwide.

So, if we are convinced of the value of stupidity, why don’t we undertake some sort of unusual action more often? Try this: list the 10 things you reckon as the most stupid and then, one by one, find a way to try them, at least in homeopathic quantity, at least once. Perhaps you’ll change your mind, perhaps you’ll find out that true stupidity belongs to those who stand still on their a priori position.

The stupid things that maybe I should be doing

Here’s the list of the stupid things I would never do in my life and that, for such reason, maybe I should be doing:

One last thought: sometimes we think we cannot do certain things because of the context or because the people around us (our colleagues or family members) wouldn’t let us…

I’d like to end this post with a much deserved tribute to the sharpest and funniest essay you could ever read with regards to human stupidity: The basic laws of human stupidity. And if you think that’s stupid, even better!